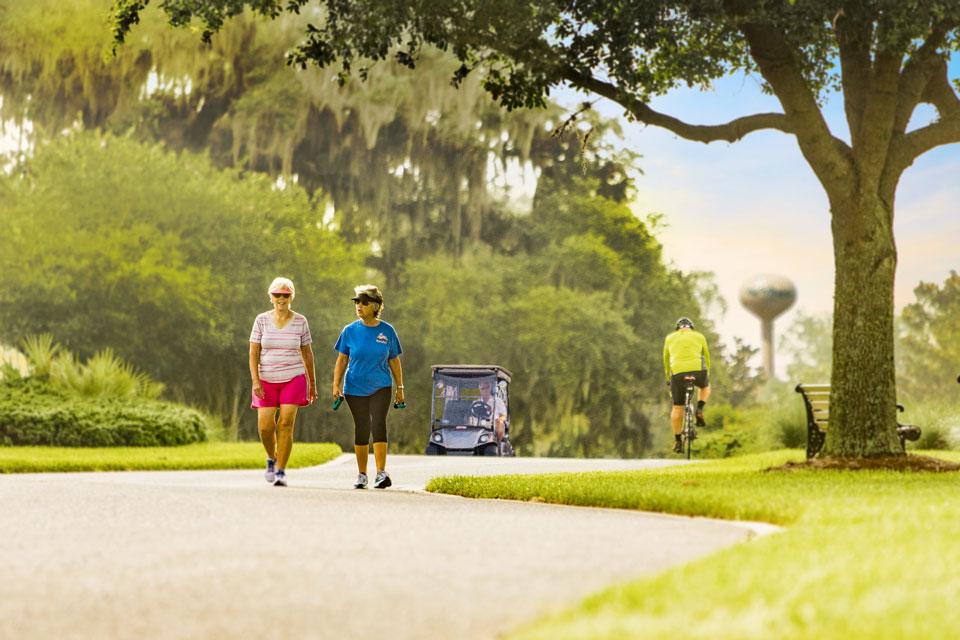 Have you ever visited a new town and gotten the uneasy feeling that it felt too perfect?

Kind of like that scene in Indiana Jones and the Kingdom of the Crystal Skull where Indy gets caught in the atomic bomb testing site, running around frantic for help because everything in it is perfectly set up as if it were a real town.

That may be a dramatic example, but it’s similar to the feeling I got when I visited The Villages for the first time.

The Villages in Sumpter County, Florida, is made up of three town squares and 100 private neighborhoods or villages. Tree-lined streets and golf cart trails crisscross the 34-square-mile area, nicknamed the “Adult Disney World.”

It really does feel like you’re entering a different world when you visit The Villages, but residents seem to like it.

The Villages was the fastest growing metropolitan area in the United States from 2010 to 2020, according to the Census Bureau. The population hit 130,000, up 39%, and it’s still growing.

I wondered if anyone outside The Villages worries about the rapid growth and the impact it has on the environment. I spoke with Sumpter County resident Brad Carpenter to learn more about the pros and cons of The Villages.

Losing Florida: When did you move to Florida and from where?

Carpenter: I’m from Alleghany, New York. I first bought a house in 2007 in Pennbrooke, but became a Florida resident in 2012.

Losing Florida: Since you’ve been here, how have you seen development change and grow? Do you think it’s been rapid?

Carpenter: Very rapid, in The Villages specifically, it’s like the fastest growing metropolitan area in the United States.

Losing Florida: That’s crazy. You mentioned something about the greenhouses and how they grow their own food for the restaurants in The Villages…?

Carpenter: Yes. Right over here on route 44, there are a ton of greenhouses.

They have their own high schools. A charter school, and the parents who work in The Villages, their children are the only ones that are allowed to go there. I mean, they have their own hospitals. I can’t even tell you how many doctors there are now. They’re very self-sufficient. The Villages make money off all the businesses because everything they sell, the administration gets a percentage of that.

And most people go there by golf carts. They have four golf cart bridges that go over the roads. One goes over the turnpike.

Well, it was supposed to be only golf carts. I went up to Spanish Village a few weeks ago, and some idiot tried to take a car across there.

Losing Florida: Oh, man. That’s not good! And then with the neighborhoods going in, could you tell me about the younger populations moving there?

Carpenter: They’re developing a separate village for people under age 55. People over 55 can go in there as well, but there’s no age limit. Whereas the rest of The Villages, it’s 55+. So this new development or new village they’re building is for all ages.

Losing Florida: For people who don’t live in The Villages, can their kids go to the schools within the district?

Carpenter: People that work in The Villages who have younger kids, their kids can go to the schools there. But the only kids that are allowed to go there are if their parents either live in or work for The Villages.

Losing Florida: And how many Villages are there?

Carpenter: I don’t know exactly, I’m guessing around a hundred. I mean, they have more golf holes than any other development in the world.

Losing Florida: Why do you think this area became so popular?

Carpenter: It was a cheap cost of living. Cheaper to live down here. Except for car insurance.

Losing Florida: What about the town squares, how many are there?

Carpenter: Right now three, but they’re in the process of building a fourth. And each one has their own theme. Western, Spanish, and Cape Cod style. And with The Villages themselves, they have different names for each neighborhood.

Losing Florida: Aside from The Villages, development wise, have you noticed how it impacts you directly in any way?

And the cost of houses too. I mean, they have really, really risen in price.

Losing Florida: Which I feel like that’s everywhere right now. But I’m sure in this area, because there’s such a high demand to live here, it’s even more noticeable in this market.

Carpenter: A thousand people a day are moving here to Florida. That’s what it said in the paper.

Losing Florida: Yeah. Well, that’s the thing, that’s why development is happening so rapidly. They’re trying to keep up with the amount of people coming in. The state is basically running out of room.

Well, it’s affecting the wildlife here too. There’s no place for them to go now with all of the development.

I mean, I think that’s why we see so many animals now. We see turkeys, wild cats, bears. Especially in The Villages because they’re pushing them all out of the woods. All the forests are going away.

Carpenter: Yeah. There was one out back by our pool the year before last. He swam across the pond to go down by the ball field.

Losing Florida: Incredible, I’m sure that was a sight.

So besides all of the restaurants coming in, just in general, do you think all of the development has impacted the economy in a positive way?

I guess they plan to build for 25 more years. Their projection is 25 years. And then, supposedly, they’re going to stop. Only God knows if that’ll be the case…

Losing Florida: Has there been pushback from anybody? Any groups that are trying to stop The Villages from building or any kind of proactive lobbying?

Carpenter: The only thing I know of that really makes them unhappy up there is that impact fee.

Losing Florida: What is it?

Carpenter: An impact fee. Everyone has to pay an impact fee when they build in there or move there.

Carpenter: Well they have to pay that, too. I think most of it goes to the city officials, schools, fire and police protection. They figure the more houses that are built, the more police and firefighters they’ll need to accommodate the population size.

Losing Florida: Well, see, I feel like they could get upset about the impact fee, but they must know that prior to them moving here – to a place that’s so popular.

Carpenter: Well, what happened is they didn’t pay for years.

I don’t know the whole thing. We’ve heard so many stories, that they got in trouble or something. I feel like The Villages didn’t pay the county. I think what happened was all of a sudden they had to pay, so they just pushed it back on the homeowners.

And I don’t think it was a low amount, so that’s why people got upset.

Losing Florida: So with the traffic, do you think that they’ve adjusted a lot of the infrastructure to accommodate the amount of cars on the road now?

Carpenter: They keep working on it. I mean, they’re barely able to stay on top of it. Every year traffic gets worse. They’ve been expanding. With route 44 out here, 10 years ago, that was just a two lane highway with almost no traffic on it.

Now it’s divided. 27 years as two lanes, now it’s three. Most of the way up to The Villages they’re trying to widen it. So it’s under construction all the time now.

Losing Florida: Where you live obviously isn’t a part of The Villages, but you probably benefit in a way since you get to enjoy the public amenities – but don’t have to pay the high fee.

Carpenter: Well, you used to not be allowed to go down their streets. There was a time when you couldn’t go down their streets because they were privately owned. But now they’ve been turned over to the county. So now they can’t block people from going into their neighborhoods.

Losing Florida: You mentioned the craft fair, how often do they do public, local events like that?

And then I would assume they have also positively impacted the value of your real estate, right?

Carpenter: Often in the town square, there’s a farmer’s market in every square. Once every week. The music and recreation area outside is open 365 days a year. It’s every night. They open for live music.

Losing Florida: Well it’s just like how they say that they’re going to only go for 25 more years… I’m sure that won’t be the case.

Carpenter: That’s what I think too. It won’t be the case.

And The Villages are predominantly conservative. The person who created them was a man by the name of H. Gary Morse.

It’s all gated and they have underground tunnels for them. That’s how Morse used to go to the movies, he didn’t want to see any people or be out in public.

Morse visited Arizona because they had a big web community out there. So he went out there and sort of studied it to get ideas.

Losing Florida: And you said you thought he was a Republican?

Carpenter: He was, he definitely was. And it started with his father-in-law, his very first development called Orange Blossom. And it was just double wide and single wide trailers at that time.

And we get The Villages newspaper instead of Orlando’s. It’s one day a week they list everything that they’re building, and what’s coming in the future.

Losing Florida: It’s kind of like its own little utopia in a way.

Carpenter: Oh, it is. People call it “Adult Disney World.”