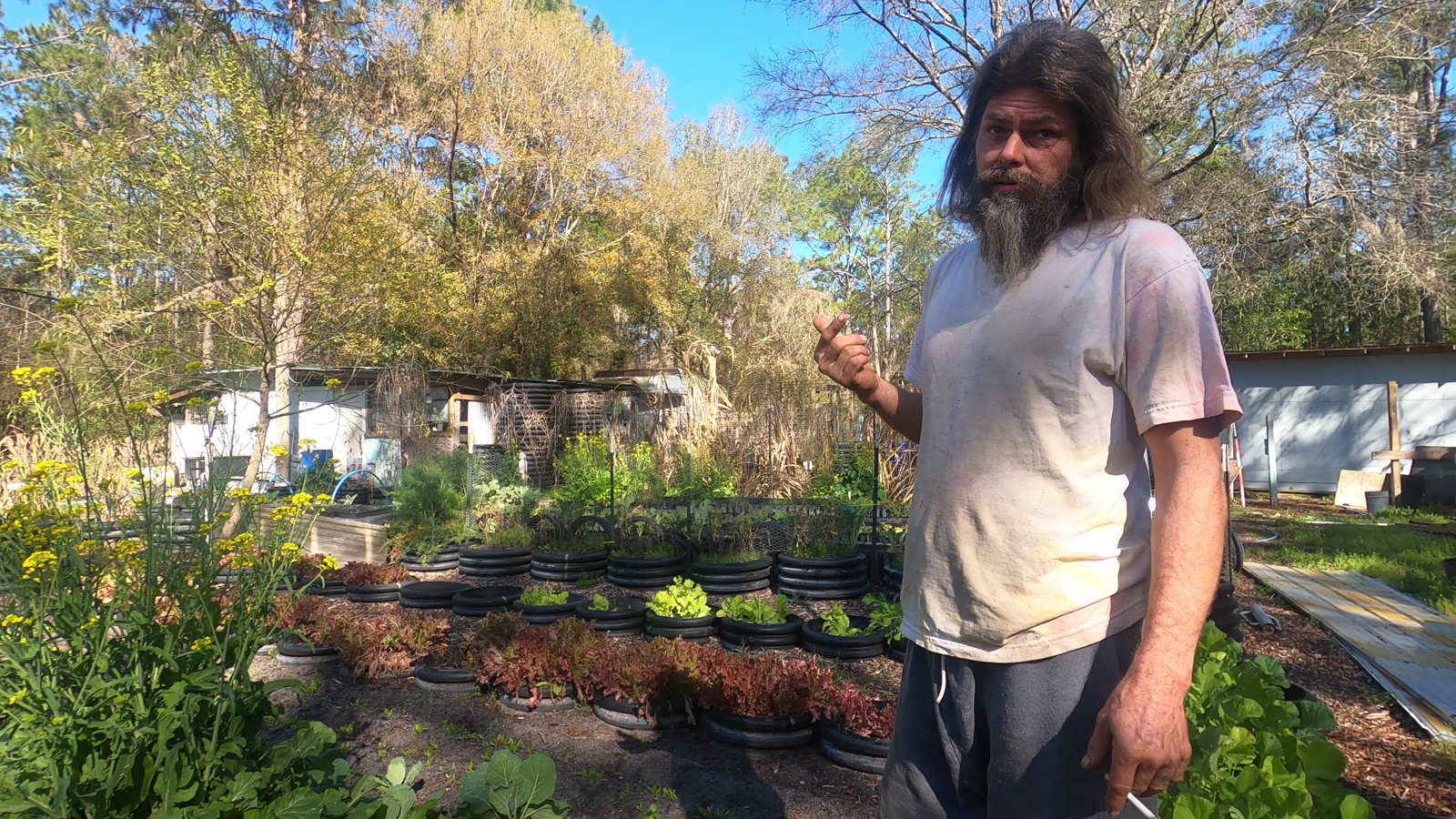 Just off a dirt road, past the steel gate and Beware of Dog sign, past dried out stalks of sugar cane and a freight container, there’s a former meth house, its walls charred and part of the roof caved in.

At least that’s how Phil Groh sees it.

“This was a bank-held house, you know, had been used as a meth lab and the bank didn’t want it,” he said. “Bank didn’t want it at all. So they dumped it, crashed. The market was already crashed. ‘08 ‘09 crash crash crash. How you think everybody woke up to 2010, ’11, ‘12 and it was frickin’ roses and sunshine. The market was still in the toilet. Crashed. I took advantage of that. I took full advantage of that. I had to. That’s the way it works in this world. You want land, you’re going to have to make a move.”

I first met Groh while working for a golf cart company in Ponte Vedra. I was doing some electrical work and Groh came in to do some welding.

He’s a commercial welder, by trade, and it was amazing to see how he worked with metal with such ease.

I got the sense right away he was a real character, someone who wasn’t too concerned about society’s expectations and wanted to carve out his own path in life.

I wanted to find out what he thought about the wave of growth and development that has swept across Florida.

So on a crisp spring morning, I climbed into my 1997 Jeep Cherokee and headed to Flagler Estates, an unincorporated community straddling St. Johns and Flagler counties in northeast Florida.

Much of the land is wet and swampy, but that doesn’t bother Groh. He said he salvaged some leftover industrial pipes to create a drainage system on his land. He cut some of the plastic pipes in half and used them to build raised planters for his vegetable crops.

He said he recycles and reuses whatever he can. When I went to see him, he and my journalism professor sat outside on Styrofoam blocks instead of chairs. Groh sees no need for luxuries or waste in his life.

There was little noise except the occasional revving of motors coming from teen-agers goofing around on ATVs.

Pine trees were all around, something that Groh said he appreciates. He said he has spent years tending to the soil and clearing debris to help the forest grow and be fertile for his children and their children.

“I want to be able to plant trees for later generations,” he said. “I want to maintain property for other people to enjoy later. You know, the true wealth is having something that nobody else can buy. Land is really it right now.”

It was becoming clear to me that Groh rejects traditional suburban development. Instead, he said he lives off the land. He hunts and traps wild game. He plants Bok Choy, lettuce and radishes. The only thing I have ever seen him buy were snacks while out on a job.

Groh bought his first piece of land in Flagler Estates nearly a decade ago.

“I wanted to stay in Florida and just on accident I found Flagler Estates. I found out that property out here was really cheap at the time, 10 years ago, and I was in a position at the time, very fortunate position where I could buy property outright without a mortgage, without a loan, without anything attached to it, which was the big criteria. I didn’t want to be trapped in a mortgage situation. I didn’t want to buy a $300,000 house and be paying on it for 30 years. So I found a place that was low enough cost and not too far out of a major economic hub where I can find work, in a big city where you find work. And so, yeah, Flagler Estates kind of fit the bill and was able to purchase the property. The property’s farmable, you know, we can grow some crops and a few things out here.

Groh embraces sustainable living, but said it’s not as if he’s off the grid.

My journalism professor and I wondered how he saw the future.

“The next five or 10 years is going to be the same shit show, excuse me, the same process that we’ve seen in the last two years,” he replied. “We’ve seen unchecked growth and development where they come in a clear cut, the entire piece of property and put a house that’s overvalued, hyper overvalued. And, and then they’ll shield it under the Ponzi scheme scam of new growth. And they’ll try to tell everybody, ‘Oh, new growth is good. We’re building our community in this state and the other,’ and it’s a scam. It’s a scheme. It’s not sustainable. Every time you see a spurt of growth, right after that, you see a recession or depression, you see, you know, one side of the roller coaster and then the other side of the roller coaster. So we’ve seen in the last year or two a couple of hundred homes being built out here. We know that it’s going to be a lot more people shopping at our little Family Dollar that can’t keep milk and bread in the store already. And we’re going to do this for another five years. Hold on. Where’s our stores at, where’s our schools at, where’s our park at? We’ve been fighting with our stupid CRA (Community Redevelopment Association) now for a shitter and a storage shed over at our little park. And the county commission has robbed us blind and this is what I’m being told by the more involved ones. But the county commissioners robbed us blind under the guise that they’re going to provide us with something and we get federal funding matches through the CRA and other crap. And then it wasn’t enough, and inflation and fees and administration and all the rest of that would rob us blind.”

Groh embraces sustainable living, but said it’s not as if he’s off the grid.

Internet service is spotty in Flagler Estates, but that doesn’t bother Groh.

“That’s not a focal point of mine. I’m not like an internet-based business or somebody that has to telecommute from the internet. So if I get a few text messages in a couple of calls, I’m good. You know, I don’t even own a TV. I just have no need. I mean, it’s the idiot box. I can find much better things just running around my yard or in my electronics shop or my workshop.

“You know, social media is pushing us in an interesting direction right now. And one of the things that I’ve noticed lately, I have friends in many different countries and they share their social media experiences with me. My buddies in some of the Asian countries are sending me really cool videos of scale miniature excavators that they’ve made on their ACNC machines. These are guys in their like teens and twenties, right? Thirties, some of them in their forties. Couple of the older masters that are in their fifties and stuff are starting to put videos out really teaching stuff. And I see my Latin American brethren down there with their social media, and they got pictures of their cows, pictures of their chickens, pictures of what they’re planning, their new tractor, how they’re doing better. And one of these idiot kids that I know from out here, he sent me a tick tock the other day and it fucking shocked me because it’s just the most retarded thing possible. And I scrolled through this kid’s TikTok and his Instagram, and I’m like, man, this kid’s doing the most stupid shit ever. And all his buddies are doing the same shit, and all the other American kids are doing the same garbage. They’re not learning anything. They’re actually making themselves stupider by the day with all this social media crap.”