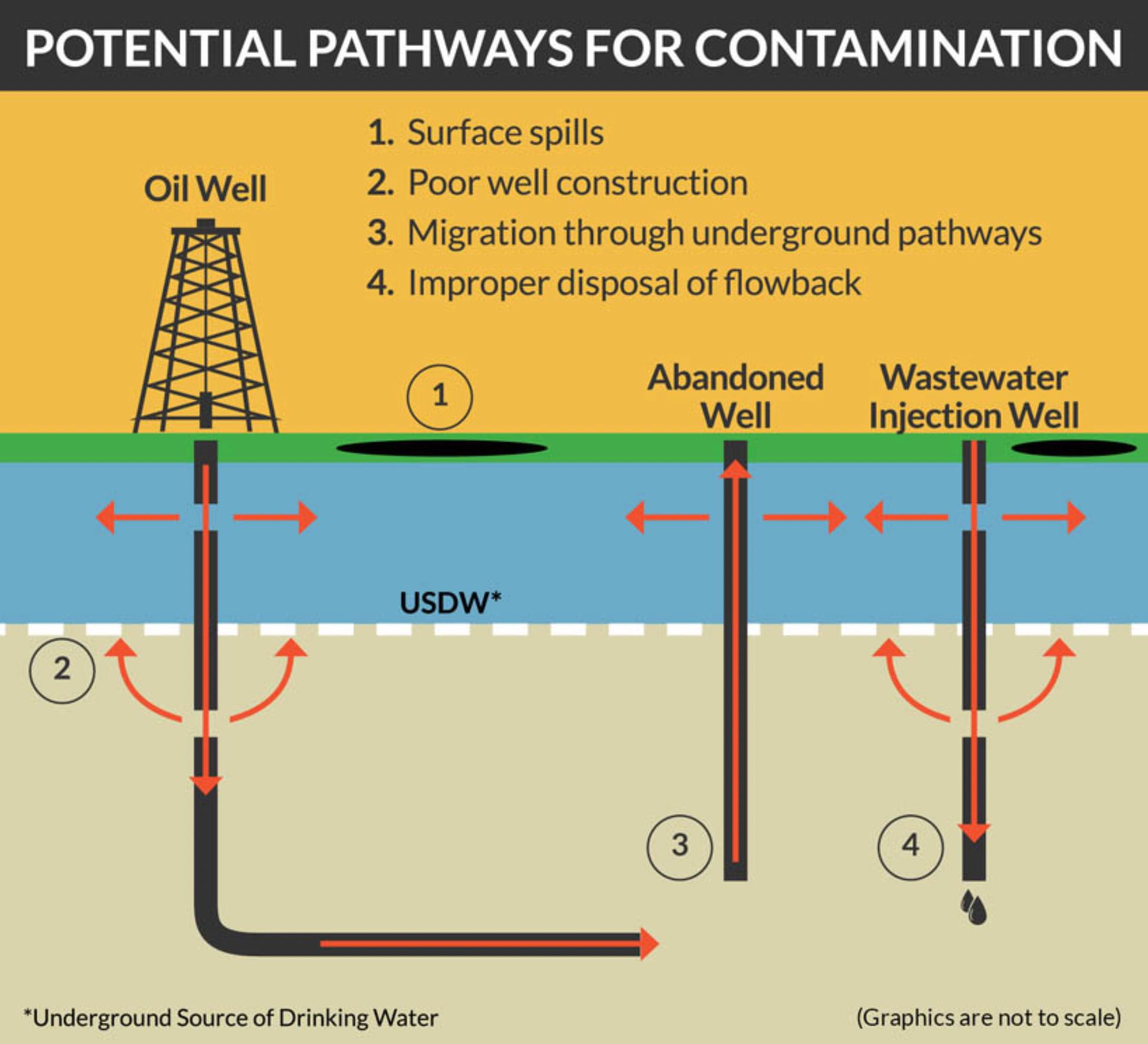 Florida’s delicate environment is especially vulnerable to the impact of oil and gas exploration, yet the state’s system for keeping public records on oil and gas projects “is unorganized and unintuitive to navigate” and some data is “mislabeled or missing entirely,” according to a January 2022 report.

A nine-person team from the University of Southern California’s Institute of the Environment and Sustainability reported their findings in a report titled, “Assessing Oversight of Acidizing in Oil and Gas Development in Florida.” Excerpts are below:

“In addition to deficiencies of the database itself, we encountered sizeable, substantive information gaps which arise, at least in part, as a result of poorly defined or regulated operator reporting requirements. Overall, over a three-month period, it was extremely difficult to identify or obtain information related to use of acid in oil and gas wells. This is a significant, ongoing concern for any effort to ensure public access to information regarding the use of well stimulation techniques, including acidizing, and the potential risks they pose in Florida.

“Between 2017 and 2018, the Burnett Oil Company conducted seismic surveying in the Florida Everglades’ Big Cypress National Preserve in its hunt for oil. In the process, they cut and knocked down cypress trees, disturbed and destroyed ground cover vegetation, compacted fragile soils, and altered the hydrology of the Preserve’s freshwater swamps, which feed the Everglades’ world-renowned marl prairies and serve as critical habitat for endangered wildlife themselves (Quest Ecology, 2018; 2019). All this before even a drop of oil is pumped from the ground by Burnett Oil. The next steps, extraction and production, are only likely to further industrialize the natural landscape and degrade remarkable ecosystems. Substantial machinery is typically needed to construct well pads, which can cover several acres, and to build new roads to reach these sites.

“Heavy trucks are used to transport chemicals and other fluids to and from wells. The alterations from development activities often lead to habitat loss and fragmentation for native plants and animals, such as the endangered Florida panther, increasing their vulnerability to invasive species and ecosystem collapse (Meng, 2016).

“New oil and gas drilling in Big Cypress National Preserve also threatens to harm cultural resources, values, and lands of the Miccosukee Tribe of Indians of Florida and Seminole Tribe of Florida, some members of which have voiced concerns over the potential environmental harms as well. Currently, the Burnett Oil Company has proposed two new well drilling sites in Big Cypress National Preserve (Schneider, 2021). In response, members of both Tribes organized a prayer walk to one of the proposed new drilling sites in April 2021 in opposition to the proposed drilling operations (Schneider, 2021).

“In Florida, producers may use acid during production in a process known as acidizing. Acidizing uses acid and other chemicals to clean the wellbore or dissolve surrounding rock and strata to stimulate the well and improve oil and gas production. However, the extent to which acid is used, and the threat it poses to the environment, are not well documented. Specifically, acidizing poses a threat to the quality and quantity of water supplies, which is a particular concern for public health in Florida, where 93 percent of the population relies on groundwater for their drinking water (Kelly & Mordick, 2019).

“As Florida moves towards potentially more drilling, we have conducted research to assess the extent of acidizing practices in Florida and to highlight many of the potential environmental impacts of oil and gas development in the southern part of the state. Based on available state records, a majority of producing wells in the state were acidized at one point during the well’s lifetime. Acidizing, however, can refer to the use of acid for both well cleaning practices (where acid is used for regular maintenance), and to well stimulation (where the acid is injected into the surrounding rock, potentially releasing the acid and associated fluids more broadly into the environment) (Friends of the Earth, 2018). It was not immediately feasible from publicly available records from the Florida Department of Environmental Protection (DEP) to distinguish whether acid was used for maintenance as opposed to production for any individual well. Nor was it clear that the available records were complete. For example, a state report stated that DEP – the state agency responsible for oversight of oil and gas production in Florida – received 41 well workover notifications – forms filed with the state to report the completion of operations to repair, maintain, or improve well function, including the use of well stimulation practices – involving the use of acid between 2016 and 2019 (Committee on Environment and Natural Resources, 2020). But our review of DEP’s available records found references to acid use for only eight wells for the same period. Further, representatives for DEP stated in personal communications that acid has only been used for production, as opposed to cleaning, in two incidences. But we were unable to obtain state records to support these claims.

“Generally, our analysis was hindered by the poor organization and availability of records maintained by DEP; our review required manually sifting through thousands of oil and gas records to locate any information on use of acidizing or other well stimulation techniques. The state’s oil and gas management system should be reorganized and expanded to allow members of the public to easily search for and filter information, including different types of well stimulation operations, taking place near their communities. Moreover, given the apparently wide-spread use of acidizing, more research and better oversight is needed to assess the potential water quality and ecosystem impacts from potential spills, leaks, and contamination.

“Oculus, the Florida Department of Environmental Protection’s electronic document management system and primary public facing portal to records regarding oil and gas exploration and development in Florida, is unorganized and unintuitive to navigate, and much of the relevant information to our survey we encountered was mislabeled or missing entirely. We recommend that the Department of Environmental Protection review its data management system to ensure all relevant records are properly organized and made available to the public, in order to allow for more transparent decision-making.

“More broadly, our research calls attention to the general lack of state regulation or oversight over well stimulation activities, such as acidizing. Though limited in its own right, California law, for example, requires substantially greater controls over the permitting, data collection, and transparency of information for well stimulation operations. Poor regulation of activities and inadequate record keeping pose a substantial threat to the environment and public health, and broadly inhibit transparency and public oversight of those activities. We recommend that the Florida Department of Environmental Protection review and update its current regulations concerning the use of well stimulation techniques, including acidizing, to ensure greater agency oversight and make all documents available to the public and surrounding communities.

“In order to fill in the gaps in our data, we first attempted to contact DEP staff over the phone in its Northwest and South District Offices. When we did not receive a response, on March 19, 2021, we filed a Public Records Request with DEP, pursuant to Chapter 119, Florida Statutes, which provides that “all state, county, and municipal records are open for personal inspection and copying by any person,” and that “[p]roviding access to public records is a duty of each agency” (Fla. Stat.   119.01). We specifically requested: all forms labeled ‘Form 8’ beginning from 2010 to the present day, which mention the use of acid, acidizing, HCL, hydrochloric, HF, or hydrofluoric, under the sections ‘Chemical or Shooting Record’, ‘Summary of Work Performed’, ‘Formation Tops’, or ‘Perforation and Stimulation Records.’

“On March 26, 2021, DEP responded by stating, “The documents you are seeking are available in our OCULUS Document Management System.” This began a multi-month saga of phone calls and emails with DEP personnel, which culminated in our conclusion that the Oculus database is strikingly incomplete.”