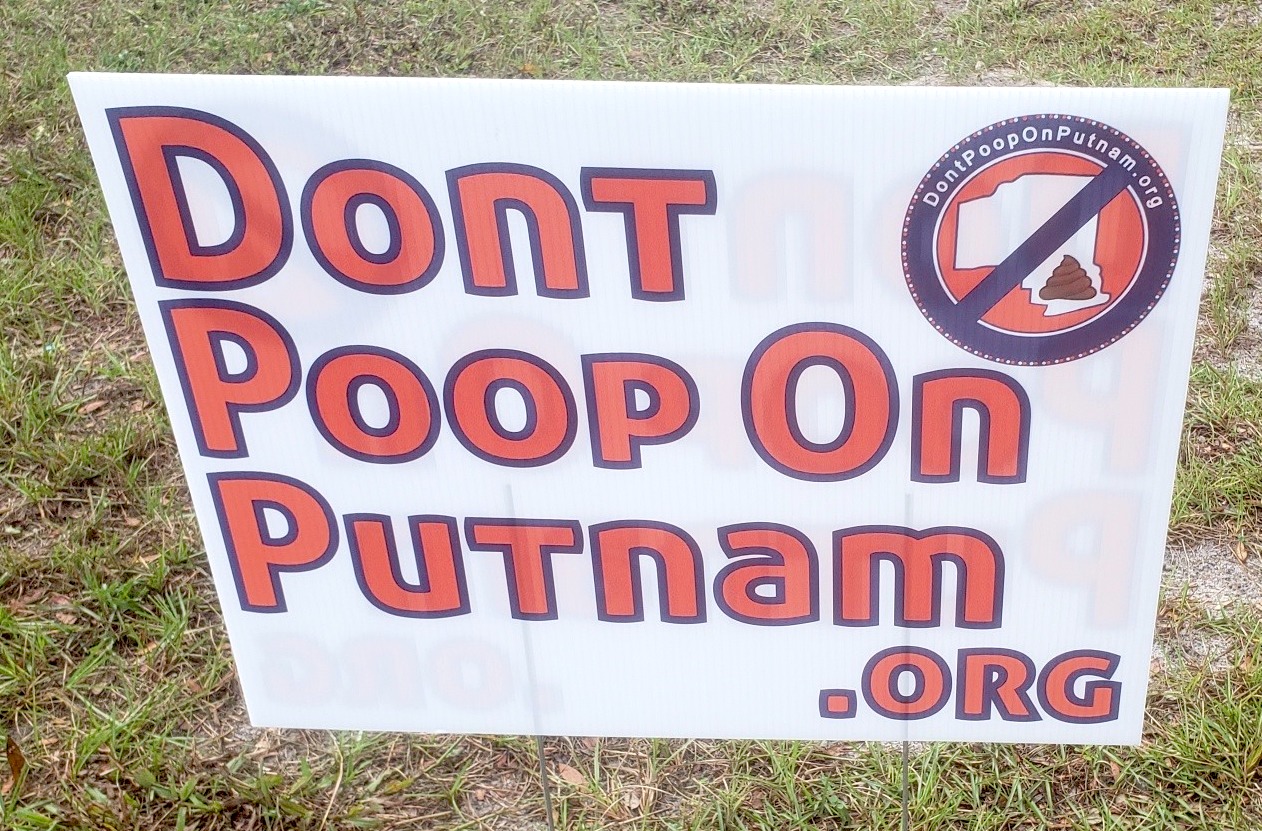 Putnam County officials next month plan to discuss banning or at least putting a hold on future sewage sludge sites.

Residents opposed to a proposed sludge operation swarmed a county Zoning Board of Adjustment meeting on Feb. 16 and spent five hours railing against it.

Larry Downes of American Bioclean had proposed operating a sludge dump on 47 acres of ranchland and Putnam County staff had recommended approval of his application, with conditions. But after furious residents spoke out against it, the zoning board rejected it.

The Environmental Coalition of Putnam County, also known as Don’t Poop On Putnam, led the fight against the dump site.

“Although the permit was unanimously denied, it is likely they will file an appeal…and we’ll have to go to circuit court,” the group’s president, Ivee Sauls, said in a statement afterward.

Putnam’s Board of Commissioners haven’t voted on the matter, but plan to discuss the possibility of stricter biosolids laws at 2 p.m. on March 8, the Palatka Daily News reported.

A Putnam zoning board staff report shows that American Bioclean had modified its original proposal and offered a plan that would include application of biosolids on 47 acres of a property spanning more than 500 acres. The report said the company would process no more than 956,000 gallons of sludge per year, equal to the volume produced by 27 homes.

The company estimated it would dump about a truckload of sludge on the site per day. The report said the nearest home was 732 feet from the application site and the nearest potable water was 546 feet away.

“We are opposing this for the safety of our children, and for the wellbeing of our community,” said Alva Gayle Maxwell, of the Crescent City Florida Moms Group. “We have children from public school, homeschool, daycares, and playgroups that play within blocks of this area, and there’s a lot of information that we’re alarmed about.”

Another local resident, Amy Moore, lamented that she had moved to the area from South Florida in order to escape the pollution, including algae blooms in Lake Okeechobee.

“And up here where we’re in the rapid refresh of the aquifer, it’s just going to be that much worse because all of those toxins are going to soak down into our groundwater, which is what feeds the aquifer, which feeds all the springs and the lakes and the rivers,” she said. “And it’s going to be horrible. Not only for outdoor activities, fishing, but water quality, wildlife, drinking water, and property values. And that’s not cool.”

Once the meeting began, members of the zoning board asked supporters of the sludge site to speak first. Silence followed and then muffled laughter from the crowd.

Then the floor was opened to foes of the proposal and dozens of people spoke against it.

Members of the crowd stood and applauded and some people hugged each other after the zoning board denial.

In the weeks before the meeting, residents sent the county letters of protest. One stated:

Usually, this type of operation is located on an industrial site. It is 6,000 feet from Crescent Lake and a stream on the site leads to Hurricane Point which is a lakeside outlet. American BioClean, Inc. states it will be processing 1,408,000 gallons of Class B biosolids annually (septic, residual and grease trap) utilizing lime with at least 5 trucks in continuous dumping operations every day. Have you ever been standing downwind of human sewage being extracted from a porta-pottie? The smell is nauseating. Thankfully, the septic truck removes the sewage away from where you are standing and the smell subsides. There will be no such respite for residents in this area. Continuous dumping means continuous smell. Everyone will be at the mercy of the wind.

If this proposed sewage treatment business comes to fruition, it may set a precedence opening up no boundaries as to where similar operations are located. Shit happens, but only on industrial sites.”

A Concerned Citizen Knee Deep in It.

“Staff does not anticipate that the use, as recommended to be conditioned for odor mitigation and with the required minimum setbacks, among other requirements, would substantially diminish or impair property values in the area or impede orderly development in the area.”

The purveyors of poop have until mid-March to file an appeal.

Ladi Sornberger, moderator of the Don’t Poop on Putnam Facebook group, predicts the case will be settled in Florida’s Circuit Court.

“We’re getting lawyers together already,” she wrote. “Please prepare your wallets. The last step may be expensive!”