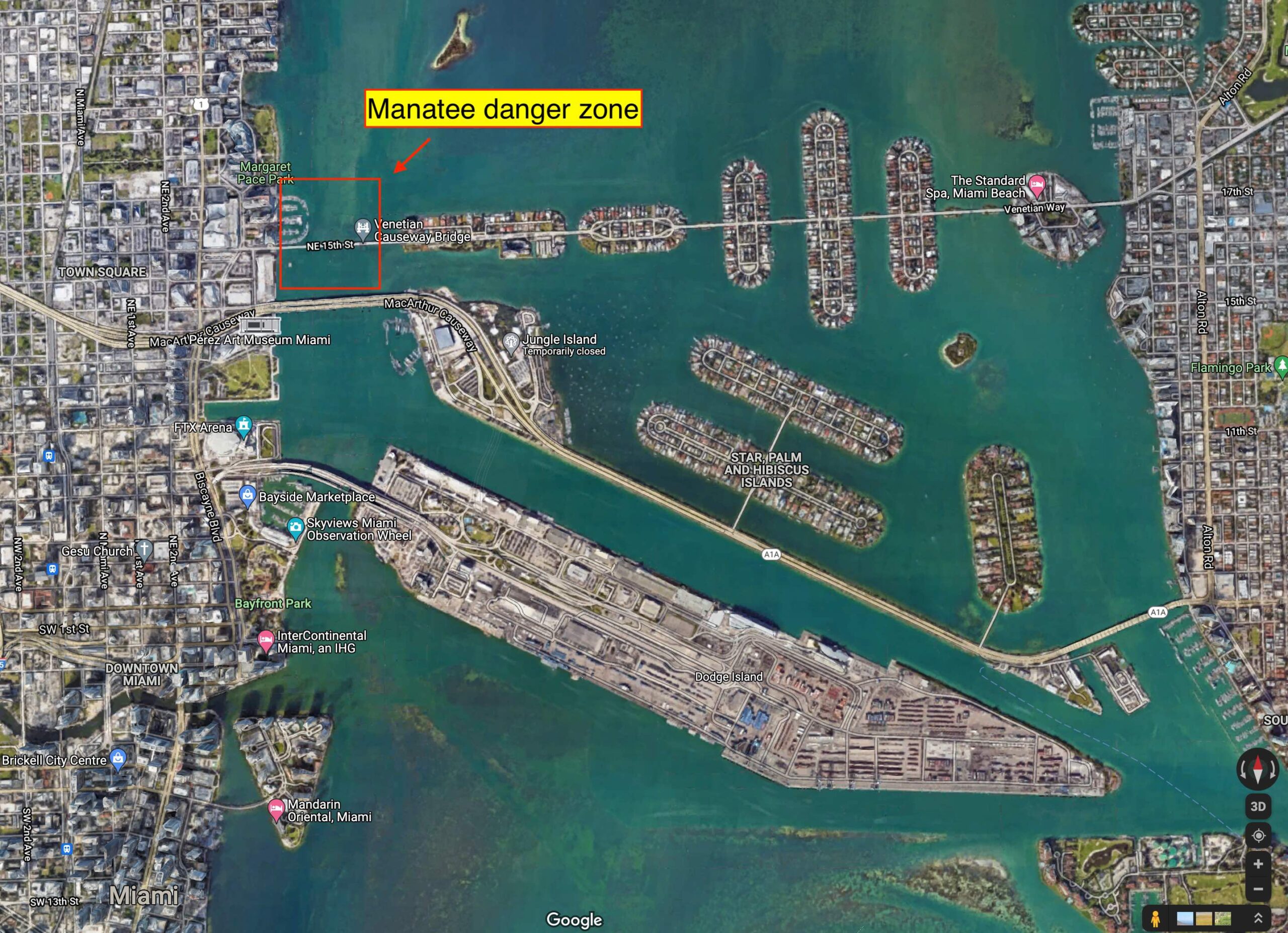 It’s every man – make that manatee – for himself.

Miami-Dade County Commissioners approved a plan allowing hundreds of boats to cruise through sensitive manatee habitat in Biscayne Bay during the 2022 Miami Boat Show, which runs through Feb. 20.

They OK’ed the plan even though their own environmental experts recommended against it.

Nearly 10,000 people signed a petition urging the county to cancel a permit allowing sea trials during the boat show. Sea trials involve the testing of speed boats, yachts and other crafts. Miami-Dade’s Department of Environmental Resources Management, a.k.a. DERM, said the sea trials could endanger manatees:

“Protecting rare, threatened, or endangered species such as manatees involves preserving important habitat that the species rely on for survival and minimizing certain human activity that can be disruptive to important behaviors that are also necessary for the species survival. For manatee protection, this involves limiting the construction or expansion of vessel docking facilities that would increase the overlap between typical manatee behavior and high intensity vessel traffic. Essential habitat is used by manatees for sensitive activities such as feeding, resting, mating, nursing, cold shelter, and travel. Furthermore, manatee sighting data also indicates that manatees utilize the mainland side of Biscayne Bay when traveling to and from areas where these sensitive behaviors are occurring.

“The Applicant has stated that the existing 222 slips at the Sea Isle Marina will not be in use during the duration of the event and has proposed to utilize 150 slips at the Sea Isle site for sea trials. The existing slips utilized by the Sea Isle Marina are primarily recreational vessels that typically do not make frequent daily trips to and from the marina. The inclusion of 150 sea trial slips, which may make numerous trips per day, is reasonably expected to result in a significantly higher frequency of use than the existing Sea Isle slips.

“…the site was only authorized for a maximum of 99 slips with a portion of said slips authorized for sea trials by vessels that had a draft of 4 feet or less. The subject modification requests to increase the number of proposed slips to 947 and to use 150 of those slips for sea trials.”

This request represents an increase in the number of proposed slips by more than 900 percent before accounting for the unknown number of trips originating from and returning to this location that may be associated with the sea trials. As the proposed sea trials are reasonably anticipated to result in an increase in vessel activity in these areas known to be utilized by manatees, DERM is recommending denial of the inclusion of sea trials for the boat show event.

“Once again Miami chooses money over environment,” cleanupthisbeach wrote on Instagram. “Manatees can be seen feeding in this area during multiple hours on a daily basis. Despite of all the risks this event will bring to hundreds of marine species that feed, shelter and nurse from the little seagrass left in this area of Biscayne Bay, Miami boat show will be conducting sea trials and hosting thousands of boats.”

But what about the #manatees? @MiamiBoatShow is back after #COVID19 pause staging sea trials in a portion of #BiscayneBay designated a manatee protection zone.
1100 plus #Manatees dead in 1 year & yet @MiamiDadeBCC approved this despite objections from @MiamiDadeRER (1-3) pic.twitter.com/Q7Tczswzwm

There is some good news.

Dade environmental officials ask people to help report manatee sightings in and around the boat show. Email baywatch@miamidade.gov or tag @MiamiDadeRER on Twitter. “That way, we can pass along this information to agencies and help keep manatees safe.”

Biscayne Bay is at the heart of Miami’s diverse marine ecosystems, including shorelines of mangroves, undeveloped islands and coral reefs. However, development poses a threat to the ecosystem and its inhabitants, including manatees and other species, environmentalists say.

Over the past decade, these waterways have lost around 90% of their seagrass beds, which manatees rely on for their survival.

In 2021, more than 1,100 Florida manatees died, most because of starvation, over development and algae bloom, according to the Florida Fish and Wildlife Conservation Commission.

Boat show organizers say they care about manatees and will protect them, saying on their website:

The Discover Boating Miami International Boat Show has an ongoing commitment to support and protect marine wildlife. To reinforce this commitment, we have implemented a comprehensive plan for the safety of any manatees in the area during the sea trials.

Dr. Hirons scope of work will consist of the following:

1) Locate, organize, and train 10-20 individuals, predominantly Nova Southeastern University marine graduate and undergraduate students, to act as Manatee Spotters for the duration of the show. A training session will be required for these Manatee Spotters on Tuesday, 15 February. Spotters will be trained to:

One Spotter is anticipated per vessel (35’ and greater). The Spotters will be required to wear polarized sunglasses and a designated t-shirt or vest identifying them as a Manatee Spotter. Each vessel should have marine binoculars that the Spotters can use for greater visual acuity.

Each Spotter will collect data on manatee observations during each sea trial and in the vicinity of the marina, base of sea trials as well as Venetian and MacArthur Causeways (number sighted, distance, day, time) on a manatee log.

3) A final report assimilating all available manatee encounter data during the boat show will be provided to Informa Markets 60 days post closure of the MIBS and receipt of all data.

4) Informa Markets has also contributed a $20,000 corporate sponsorship of the Society for Marine Mammalogy’s (SMM) international conference, SMM2021, which will be held in Palm Beach, FL 1-5 August 2022. During the conference, Dr. Hirons will present the results of her final report, and a moderated panel of biologists, regulators and industry representatives will discuss the importance of coordinated environmental initiatives among the business community, the scientific community and government.

1 thought on “Miami manatees in peril”